Collins & Jewell Has Room to Grow 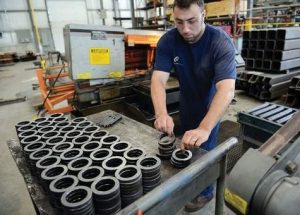 The new building, with 35-foot ceilings, combines office, engineering and manufacturing space under one roof. The 35,000-square-foot structure, completed last winter, allows the company to take on major projects it would have had difficulty with just a few months ago.

“We wanted it to be an upgrade for everybody,” Brian Dudek, chief operating officer of the company, said to a crowd of more than 100 at the ribbon-cutting ceremony. “I think we accomplished that.”

Business partners Dudek and Chris Jewell, chief financial officer, like to joke that they are part of a two-and-a-half-generation company. Jewell’s father and grandfather were principals in the company, making him the third generation of his family to work there, while Dudek worked his way up at the firm before buying the business with his partner.

The company, which dates to 1946, started out as a small steam boiler installer and manufacturer launched in Mystic by Rudolph Collins and Robert Jewell Sr. More than four decades ago, their sons, Thomas Collins and Robert Jewell Jr., formed the second generation that went on to take an ownership position, moving the company to Norwich in 1989 before selling to the third set of partners in 2005.

Over the years, the company has evolved from a strictly local concern to an employer of more than 50 that counts major international firms such as Electric Boat as one of its major clients. Dudek said he is always traveling — to Alabama, California and Virginia, for instance — and is regularly introducing his company to new potential clients, including those from Mexico, the Philippines and China.

The company has even completed a project in Russia for an oil-exploration firm.

“We’ve been successful because we’re very diverse,” Dudek said. “We install all over the world.”

Collins & Jewell is best known for its custom metal fabrications. Much of what the company builds provides the framework that workers use to build or maintain large devices such as submarines.

“The bulk of our work is domestic,” Dudek said. “We have established a very good team.”

Dudek also credited the state Department of Economic and Community Development as well as the SouthEastern Connecticut Enterprise Region for providing financial support for the new headquarters. The state’s Small Business Express program provided a $250,000 loan with the expectation that the company would add at least five more employees to its payroll — a target Dudek said the company had reached.

During a tour of the new building, Robert Jewell Jr. recalled the old days of the company, when his father would take a chisel and a hammer to install by hand the little steam boilers that were sprouting up everywhere. He said much of the operation worked out of the back yard of his home on High Street in Mystic.

Now, portraits of the founders peek over the shoulders of executives who meet in the company’s main conference room.

But some of the biggest changes can be found in the manufacturing plant.

The ceiling is also much higher than at the company’s previous facility — 26 feet vs. 18 feet — allowing employees to flip over large frameworks within the facility, something that could not be done before.

The maintenance shop, like the rest of the facility, is about double the space available at Collins & Jewell’s previous plant. A section of the plant devoted to the company’s road crews also has been updated, providing employees easy access to trailers with enough room for mechanical lifts that can be transported to job sites around the United States that call on the company to install and relocate equipment.

A flexible cell setup in the main section of the factory allows for as many as 20 projects going on at any one time, including fabrication, welding and assembly.

“Everything in here can easily be moved … depending on our workload and what we’re expecting in here,” said Kevin Lavoie, a plant manager.

Dudek said the company faced a couple bumps along the road to creating an updated production facility with all the bells and whistles. But he had nothing but praise for the town, executives of Eastern Savings Bank (he jokingly attributed the recent retirement of bank president Jerry Coia to the new facility) and all the professionals who worked on the project, which has been in the planning stages for several years.

“We’re very proud to come from a small shop to a new level here,” Dudek said.